Gods Without Men by Hari Kunzru 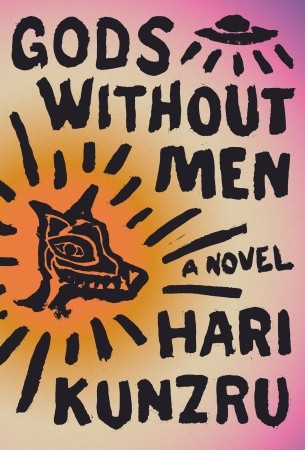 There are many places around the world that people consider special.  Some are visual, such as Niagara Falls.  Others have been build by man, including the great pyramids of Egypt.  And then there are places of power, Stonehenge being the one that leaps first to my mind.  According to this work of fiction, there is one such place found in the Mojave Desert known as the Three Pinnacles. Author Hari Kunzru begins Gods without Men by relating some of the events that have been occurring in that vicinity for centuries.

Lisa and Jaz Matharu and their young autistic son Raj, are drawn there at the same time as British punk musician and singer, Nicky.  When Raj disappears, the three adults lives are pulled together in a parent's worst nightmare.

This is not the first strange occurrence or disappearance in the area.  There are written records of such events that stretch back at least 200 years, and the local Indian tribes have stories, perhaps myths that reach even further back.

Much time is spent detailing these past events.  While they were interesting, I kept feeling as though they were keeping me from the real story, the story of Raj.  I wanted Mr. Kunzru to just get on with it and tell me about that little boy.

We learn very quickly that this is a special place, but that it means different things to different people.  Some view it as a religious place, for others has an 'other worldly' pull and for others yet, it is just an excuse to 'drop out' and do as they please.

It was an entertaining read, particularly the parts about the Matharu family and how they dealt with the situation, but the ending left me confused, as though I missed the bigger part of the story.  I'm not disappointed that I read it, though a little less ambiguous ending would have pleased me.

Thanks to Random House Canada for use of the cover image.
Posted by Heather at 13:02