Temptation of a Highland Scoundrel by Sue-Ellen Welfonder 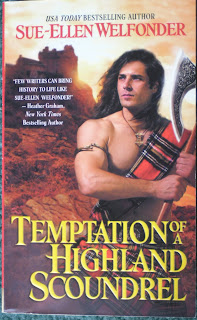 A viking berserker and Scottish highlander, Kendrew Mackintosh is both of these rolled into one.  Most of the time his is a fiercely proud highland warrior, but when his clan is threatened he calls upon his Norse ancestry to ensure their victory and ultimately their survival.

Lady Isobel Cameron can  see beneath this brutal exterior to the passionate man hidden inside.  It is that part of him that Isobel seeks.  In the past year, she and her two friends, Catriona MacDonald and Marjory Mackintosh have sworn a pact to bring peace to the Glen of Many Legends, but each marrying a high ranking male from a neighbouring clan.  The other two see heartbreak for Isobel should she continue with her desire to win Kendrew's heart.

The story begins on Midsummer's Eve 1397, a night of wild revelry and unbridled lustful activity.  Isobel views this as her chance to observe Kendrew and learn the secrets to winning him.  Unfortunate for her, she underestimates the skills of her adversary and falls even further under his allure.

As I've said before, what's not to love about a bunch of highlanders parading around in kilts.  It doesn't get much better than that.  It was fun watching the story unfold and anticipating some of the barriers that would stand between fulfilling Isobel's desires.

One thing that gave me pause, was the size of The Glen of Many Legends.  Were the castles really that close together than Isobel could easily walk most of the way between them in the early part of midsummer's eve?  This was not such a large concern, as I was able to put this aside and believe that she was just a very determined woman in love.

While this is the second part in a trilogy, you can read it as a stand alone novel and not feel that you are missing any of the back story.

Visit her website to learn more about author Sue-Ellen Welfonder and her writing.

Those bare chested kilted highlander's get me every time lol! Ringing up the library right now to see if they have them or can get them...like I have time to read!