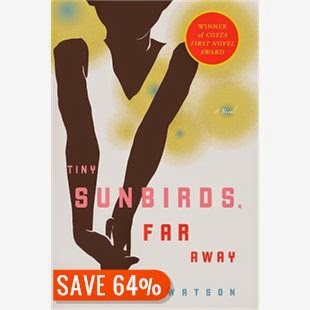 I was looking for something a little different  to read when I picked up Tiny Sunbirds Far Away by Christie Watson.  A coming of age story of a12 year old girl is nothing new, but when it is happening in far away Nigeria, to a girl who is ripped from the comfortable Christian city life she knows and is thrust into a rural Muslim compound with almost two dozen people she doesn't know, that is new.  Blessing thought her life was almost perfect, she adored her father and brother, loved her apartment, her school and her life in general.  She even liked Zafi, the one eyed, one footed driver of the family car.

Every thing is new in Warri.  Blessing doesn't know her grandparents, nor does she understand why there are none of the physical comforts that she is used to, even the food is different.  She is worried all the time about her brother Ezikiel with his peanut allergy and his asthma.

One aspect of her new life that she is drawn to, are the stories her grandmother tells.  When she tells a story, all the children in the compound along with their mothers, gather round and listen.  This is when grandmother entertains but also educates her charges.  As the weeks pass, Blessing has many questions for her grandmother, but she has to wait until grandmother feels the time is right for them to be told.   She uses this same approach, using stories to introduce Blessing to her future career as a midwife.  Grandmother has been a birth attendant for decades and had been waiting for the right girl to come along to be trained.

I enjoyed watching as the group of strangers became a close family.  Soon after Blessing and her mother and brother arrived, grandfather decided that he needed a second wife, one who could give him a son.  The new wife, Celestine, was equally an outsider to this family.  It was a touching moment when I realized that grandmother had accepted her as a sister.

I was frustrated by the story line of the oil companies in Nigeria.  Not that I felt it was  a poor choice of plot line, rather that it is such a huge injustice to the people of the country, and as a reader I felt helpless.

I read an ebook version of this novel.  At times, the story seemed to jump from place to place or leap in time.  I don't know if it was due to the electronic format.  One moment I'm reading about one thing, and then in the next paragraph I was reading something at a much later time frame about some unrelated event.  I don't know if the paper version had an extra space between those paragraphs or some other means of indicating a change in time or setting.  Yes, it was a bit unsettling, but I got used to it after a while and it didn't much interfere with my enjoyment of the story.

419 by Will Ferguson also touches on the issues of the oil companies in Nigeria.

Thanks to Stu at the blog Winston's Dad for directing me toward this book.

Thanks to Chapters.ca for use of the cover image.
Posted by Heather at 08:00

Blessing sounds like a wonderful character. I like the idea of strangers becoming friends and family. Like you, I'm not that comfortable with books that deal with situations that make me feel helpless.
All in all, I think I need to read this book. It seems that everyone who has read it liked it a lot.

A shame that this jumped about like this, I know it's something I find frustrating.

blessing sounds rather interesting character I think Ill put this one down on my wishlist as I wasn't sent it but I do get mainly there translations many thanks for joining in ,all the best stu