Welcome to my regular weekly Needlework Tuesday post where I share whatever I have been stitching during the past week. I find this a great source of encouragement as I always want to have some sort of progress to share with you. Feel free to grab the cute little mouse and add him to your needlework post, then leave a comment with a link. I'll be sure to drop by and visit.


Every now and then I realize that I have been taking myself too seriously and that I need some play time.  Last week was one of those weeks, and what a better way to play than with fabric.  So how did it all start?  At the beginning of March, I posted the results from playing with a couple of variations of the Disappearing 4 patch block.  It was a lot of fun and results in a top for a lap quilt.  When I was visiting the website of designer Brenda Miller, she asked if any of her readers were working on a 'modern' quilt.  I answered, wondering if the disappearing 4 patch qualified.  Her response was to question whether I had cut them 'off centre'.  hmm, that got me thinking as all of the patterns I'd tried were cut symetrically.  I was sure that with a bit of planning I could come up with an interesting new variation.
I found two metres of a unique blue, it was printed in seven lengthwise strips each of a different shade of blue.  All squares I started with were cut 6 inches square. 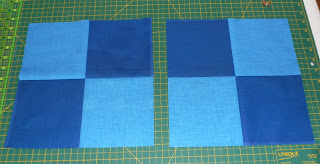 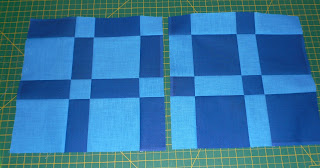 For the disappearing part, I moved the segments in the 12, 3, 6 and 9 o'clock positions.    When sewn together, I found it kind of boring.  Time to try it again.

Again, two four patches, this time using 4 different fabrics.  Carefully stack  the blocks on top of each other with a light block on top of a dark block.  I pinned at the seam allowances so they wouldn't shift when cutting.  I got carried away and forgot to take a photo of the next step .  I cut four diagonals: left, right, top and bottom, being careful not to cut too close to the centre. 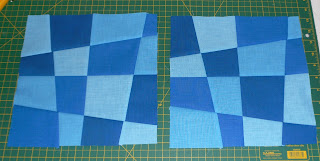 I shifted pieces in the same manner as above and re-sewed the block.  A few times I had to repress seams so they would match up. My goal was to preserve the original  four patch appearance, and I pinned to match those seams. 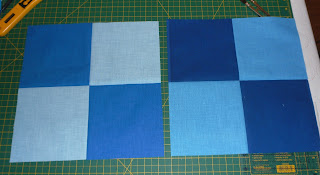 My third attmept.  Again, two blocks with four fabrics, this time I chose shades that were more distinct. 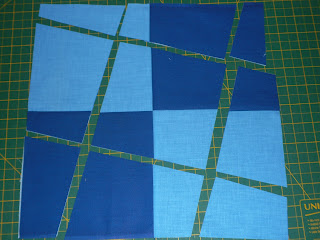 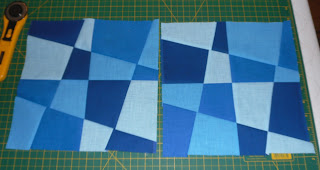 These two blocks are my favourite so far.  I have plans to try them again in different fabrics. 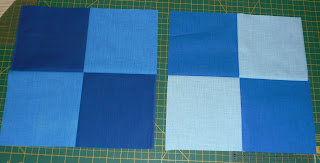 One final attempt as the previous six blocks aren't enough for a quilt. 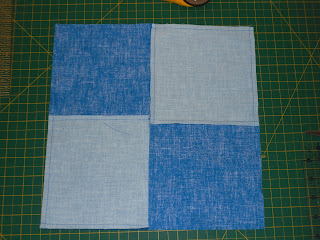 New approach this time.  I layers the blocks right sided together with a light square on top of a dark square.  Sewed a quarter inch seam all around the out sidee of the block. 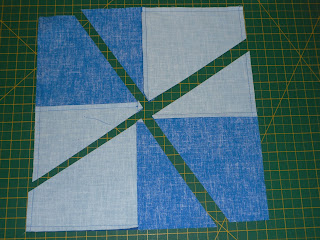 Mark two inches from each corner and cut across the middle of the block twice.  Unpick the bit of stitching and press open the block. 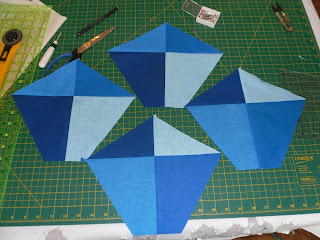 Interesting kite shapes.  I needed to square these up. 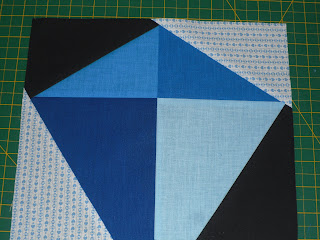 Squares, now I can work with them.

The four of them together formed an interesting unit.  Now I had the working pieces for a quilt.  Add a couple of intact 4 patch blocks. 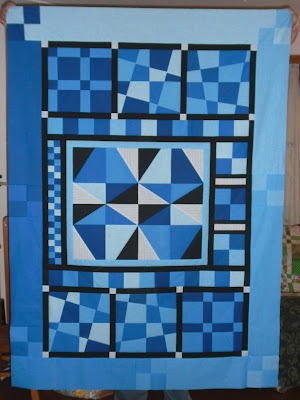 Finished quilt top measures 44 x 60 inches.  This photo does no justice to how blue it is.  It practically vibrates.
That was fun play. I do think that I have worked disappearing 4 patches from my system for a while.
What do you do when you play with your stitching?
Rikki at Rikki's Teleidoscope is working on a lovely crochet scarf using the most gorgeous wool.
Marie at Daisy's Book Journal shares with us her finished afghan.  Great work Marie.

Hey Heather, Brenda here! Wonderful, fun and playful. Next I think you should write a book using each of your blocks as the basis for a separate quilt! I think this could work into a really spectacular new approach!

OMG, that is mind boggling! I got lost me at image 2, :).
But I like the end result.I wonder what this would look like with various colors and patterns. Too busy?

POsted about my scarf today. It has grown by about 3 cm since I told you about it. Way to go!!!!

This is awesome, Heather. You surprised me. Here I thought you were just playing around with blocks, but before I knew it you had a whole quilt assembled. I love it!!! Love the blue, the arrangement of the blocks, everything.

That's amazing! What a fantastically unique quilt, and fun!

looks like a lot of fun was had with this one.

Great experiment, and what a clever way to put all those blocks together. Very inspiring, thank you!

Who knew you could have so much fun with four patches. They all look great. Makes me want to make some and play.

WOW! Heather this is awesome! Looks like you had heaps of fun and made a wonderful quilt in the process:)