Red is for Rage by Connie Corcoran Wilson 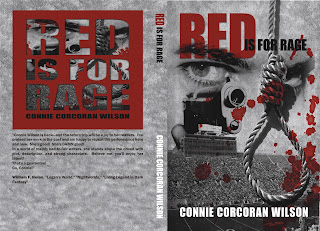 Cedar Falls, Iowa seems like and idyllic place to live and raise your children.  Unknown to a casual visitor is the dark history that it hides, that of rampaging murderers and evil incarnate.  It does have a chance at normalcy in the form of high school senior Tad McGreevy.  Since he was young, Tad has seen colours attached to each person.  Most people show colours that are  indicate benign behaviour, though a few exhibit khaki, which is a sign that a person is truly evil.

Tad still has no clues how to control his paranormal power, but he hopes it will help him to find his friend Stevie Scranton who has been missing for the past nine months.  Up till now, no one has a clue as to where Stevie is and who might have taken him.

Unknown to Tad, Michael Clay, aka Pogo the Clown, has escaped jail and is looking for revenge against him.  Michael exhibits the colour khaki.  Also on Tad's trail is Daniel Malone, but I can't tell you why as I don't want to spoil any of the plot.

This is the second book in the adult series The Color of Evil.  While you could read Red is for Rage as a stand alone, I highly recommend that you read The Colour of Evil first as you will want to know all about the earlier events that happened in Cedar Falls.

I liked that this second book paid more attention to the characters of Tad, Stevie, Jenny and Janice.  We get to learn more about what drives each of them and how they they interact with each other and the adults around them.  It also made me care about them.  I was particularly drawn to Stevie and Janice.

Red is for Rage is a work of fiction, but Ms. Wilson has included a number of references and statistics that are true.  Be sure to read her end notes for those details.

There are a number of stories lines that are left hanging, and are begging for completion.  The loathsome Principal Peter Puck,; realtor Andra SanGiovanni, Jenny's mom; and what about Jenny herself.  She has some unresolved issues.

I didn't find this book as scary/creepy as I did The Color of Evil, it was more eerie.  I knew that something was going to happen, I just didn't know what or when.  Ms. Wilson introduced a number of side stories that each could have been the 'big one'.  Again, I found myself wanting to continue reading to find out which of these stories would develop furthest.  I wasn't able to complete the reading in one sitting, but I was back up early in the morning to finish.

Also by Connie Corcoran Wilson:
The Color of Evil

Thanks to Virtual Author Book Tours and author Connie Corcoran Wilson for my review copy.

Thanks for taking part in the tour. I'm glad you enjoyed Red Is For Rage so much!

Glad to read this was more eerie than outright scary and as such I'd be more likely to skip I didn't find The Color of Evil and start with this.

Wonderful review. Adding to my TBR :)

that is a stunning cover ,all the best stu