The Last Song by Eva Wiseman 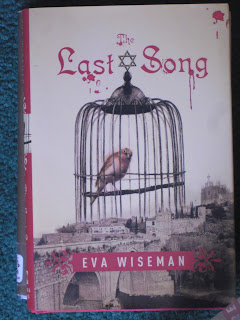 This book is set in mid 1491 Toledo, Spain.  King Ferdinand and his wife Queen are on the throne.  There is much religious persecution at the time, both of Jews and Muslims.  The priests and familiars of the Inquisition are actively rounding up and interrogating even those who converted to Christianity several generations earlier.

Isabel has been raised a Catholic and has no reason to fear the Inquisition, or so she thought.  What secrets has her parents been hiding from her, and why are they insisting that she marry Luis de Carrera, a boy she doesn't know and has taken an instant disliking to.
The persecution of any people for any reason is a difficult topic even for adults.  It is even harder to explain these things to pre-teens.  Why should someone be shunned or jailed for the choices/beliefs of their parents, grand parents or even great grandparents.  Author Eva Wiseman introduced the topic of religious intolerance in a way that a twelve year old could deal with.  She didn't go into extreme detail, but choose to keep to the basics.  Pre-teens don't want all sorts of complex detail, they want to the story to proceed and to find out what happens next.  As an adult, I want those details, so this book left me a bit wanting.  The characters were developed just enough for the story to move along, but not so that I felt I was getting a minute by minute detail of every thing that had happened to them before page one.
Along with Isabel, who has been living a very luxurious existence, we also meet Yonah, the son of a Jewish jeweller who lives in the ghetto.  While they come from very different backgrounds, they are both honest, trustworthy people.  That their relationship did develop brought hope to this story that there didn't have to be walls erected between people of different beliefs.
All in all, I thought this was a good read for the audience it was written for.  I would definitely read more by Ms. Wiseman, keeping in mind the age that she is directing her stories at.
For an adult view of this same time period, read my earlier review of People of the Book by Geraldine Brooks.
Thank-you to Tundra Books for my review copy.