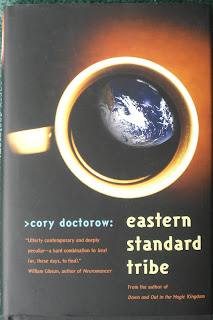 Eastern Standard Tribe by Cory Doctorow was my selection for my local book club read this month.  It had been sitting on my shelf for over a year and I was still curious.  The premise is that that people are divided by time zones.  They don't have to live in a particular time zone to identify with it.  With an online world, it is easy to work and socialize/game with people anywhere.  The main character Art Berry identifies with the Eastern Standard (EST) time zone even though he is currently working in England.  This constant time zone shifting tends to play havoc with peoples states of mind.

While Art is in London working for one company, he is actually an agent for the EST and trying to undermine the company's success as well as the standing of other tribes.  All seems to be progressing well until he is involved in an automobile accident. He hits a pedestrian, Linda, and they both end up in the same hospital room.  From that point on, their paths cross and intersect as they build a personal relationship.  This turns out to be a major complication in his line of business.
Our book club had a lively conversation of this book.  The concept of aligning yourself with people from different time zones was a bit far fetched.  Yes, we admit that it does happen for the purpose of work meeting with distant staff and for online game playing, but to live your whole life with a shifted internal clock, nope, we didn't buy it. Only exception I came up with was those scientists studying the Mars Rover who set their hours by Mars time.
How widespread are these tribes.  We all got the impression that it was not a global phenomenon, rather small groups of dissatisfied people who had banded together. Outside of these groups, the general population hadn't heard of them.  One of the doctors in the hospital has no idea what Art was referring to.    This brought us to question whether Art really did belong in the psychiatric hospital.  oops, I didn't tell you about that, you'll have to read and find out how and why that happened.  If he wasn't crazy, then was he just suffering the effects of resetting his internal clock due to his overseas travel.
This was another enjoyable book by Cory Doctorow, though I would have liked if the final chapters had been expanded.  It seemed a rushed, that the developments could have been explored in more detail.
Also by Cory Doctorow:
Little Brother

Interesting that you also mention what your fellow readers thought of this one.

Not too sure its a book I'm ever likely to read but hey never say never.

he has been on my radar for a while but never quite got to him his books always seem very interesting ,all the best stu

Not sure it's a book for me, but the time zone concept is interesting. Thanks for the review :)

That certainly is a creative concept! I bet there are all kinds of people in real life who are parts of odd groups that the general population have no idea exist.