Nobody by Jennifer Lynn Barnes 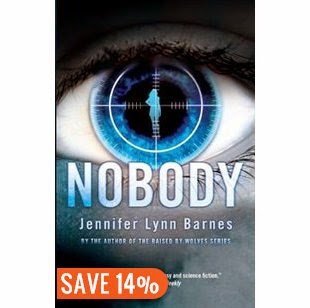 I've had days when I felt no one was listening to me and that I might as well be invisible.  Imagine this is how you  are treated every single day even by your own parents.  They forget you at restaurants, at vacation sites and even  have a big note posted on the back door to remind them of your very existence.  One upside is that you can do anything, because no one ever notices you doing it.  You could be the world's most successful assassin or criminal and no one would know it was you.

Claire Ryan is 15 and wonders why her parents don't pay her attention, why her teachers never notice her hand up in class and why her classmates never talk to her.  All this comes to a head on a day when someone finally does notice her, and it's not a good thing.

Nix is 17 and has lived in a plain, white room at the Society ever since he can remember.  Even the most sensitive people there have a difficult time noticing him.  For years they have trained him as an assassin, the most invincible one in the world.

What could happen if Claire and Nix were to meet?

I was fascinated by this concept.  For me, this would be like a nightmare come to life.  Being a nobody in a very social and interactive world.  It would have been even worse for this to happen as a teenager.  At that age, being noticed is of utmost importance, otherwise they wouldn't tryout for teams and join clubs, and spend hours choosing clothing an grooming.  Being visible is every thing.

It was difficult to watch Nix as his world fell apart, for him to learn that he had been fed a pack of lies by those adults he was supposed to have trusted for his entire life.  With no outside influences, he'd never questioned what he was told, where as Claire went to school and learned to ask questions as does every student.  Her view of the world was based on wide experiences.

As an adult reading a YA novel, I enjoyed the story and the concept.  I wasn't too worried that there was little attention paid to the morality of supporting themselves and procuring supplies.  A couple of times, Claire and Nix discussed whether they should be concerned about her no longer being at home, and it was a simplistic approach, but considering their status as 'nobodies', it was probably quite appropriate.  There was enough details about both of their childhoods and their upbringing that I felt as though I knew them and could empathize with their situations.

This is the first novel I have read by author Jennifer Lynn Barnes and it won't be my last.  She has two  stand-alone stories and  four series at present, though she is currently working on more.

Thanks to Chapters.ca for use of the cover image

Not an author I had previously heard of but over the last few weeks I've seen this book featured on several blogs. Glad you enjoyed it as it does seem to be getting quite a positive response from readers.

HI Petty Witter, I either heard about this book from a review on another blog, or from Shelfawareness. I requested it from my library immediately but had to wait for their order to arrive and be processed into the system.