The Time of the Hero by Mario Vargas Llosa 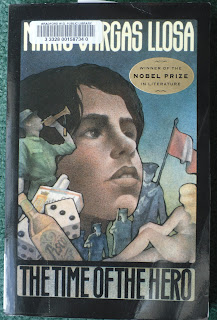 This 1962 book is set in Lima, Peru at the Leoncio Prado Military Academy.  It Academy is a real school and was established 1943 and author Mario Vargas Llosa attended in the early 1950's.  This book is based on his experiences at that time.

The academy is a boarding school and each of the three years are divided into sections.  You study, you practise manoeuvres, you eat and your sleep with your section.  You spend almost 24 hours a day with the same group of students with a limited amount of adult supervision.  These students are soldiers and are expected to act as such.  The Poet, the Slave, the Boa, the Jaguar, Curly and Cava the peasant are all in the same section.  During their first year, they are repeatedly and brutally initiated by the senior year cadets.  The Jaguar decides he is not going to put up with it and stands up to them, which results in the end of the initiation rituals for his whole section.  Along with the Boa, Curly and Cave, Jaguar forms an inner Circle to protect his section.  After their counter-attacks of the senior boys, the officers disband the Circle.  That doesn't mean the end of their camaraderie and plotting.
Becoming men while attending the Academy is not an easy process for all the students.  There is a a distrust of all the officers.  The students view them as adversaries and certainly not anyone they could confide in.  At the sametime, these same officers seem to only see that which they chose and off look any infraction which wou take tiem out of their ease to notice.  Smoking, drinking, bullying.  The Circle has picked on one student throughout their entire three years, the Slave has been bullied and picked on by almost everyone and every day.  They also have a dislike of anyone they deem a 'peasant', which includes anyone from the mountains, the small villages or that is an Indian (I assume this is the indigienous Peruvians).
Intermixed with the stories of events within the Academy, are the back stories of some of the boys, what lead up to them becoming cadets.  At times I found  it difficult to determine which boy was narrating, but as I read along and learned more about them, it did become more clear.
In some ways, this book reminded me of The Lord of the Flies by William Golding. Even though the cadets were supervised daily by their teachers and officers, they left to manage themselves during their free time and when they were in their barracks.  They didn't seem to be given much moral guidance during these times.  When they were with their families, their mothers treated them as men and mostly left them to their own devices with little or no attempt of discipline.  I have not idea if this was because they were cadets or due to their culture.
This was an interesting read that introduced me to  a very male world of which I can never be a part.  The writing style is casual and really gave me the feel of young teenage boys talking.  Since this was Mr. Llosa's debut novel, I am not looking forward to reading one of his later works.
Thanks to Stu at the blog Winston's Dad for introducing me to this author.  I do have a friend in Peru and I have been wanting to learn more of his country and for me, reading is a terrific means of learning.
I found an interesting article at the Universal Peace Federation website where Mario Vargas Llosa was welcomed back to the Leoncio Prado Military Academy.
Posted by Heather at 08:00

Great find Heather. Books like these make me seek out the history of people and events.

many thanks for the mention I love his works not read this one but lot of them tend to have an autobiographical twist to them ,I ve two currently waiting to be read then may get this one ,all the stu