From the Kitchen of Half Truth by Maria Goodin 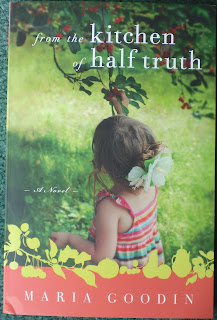 I've heard it said from many people, that the kitchen is the centre of their home.  It's where the food is cooked, the meals eaten,  the kids do their homework, socializing takes place and so much more.  Author Maria Goodin tells the story of Meg May and her mother Valerie.  All Meg can recall of her childhood are the fantastic stories her mother told her.  In fact, she heard these repeated so often, that she lost track of the truth.

Now that her mother is seriously ill, Meg has returned home to take care of Valerie and hopefully to convince her mother to tell her the truth behind the stories.  Instead, her mother spends hours each day teaching her to cook the many dishes that have fed them and their neighbours over the years.  Every time Meg presses her mother for the truth, she shys away and diverts to some other story or to talk of her garden.

With the help of Ewan, a neighbour hired to bring the rambling garden under control, Meg learns to let her imagination back into her life and to accept her mother as she is.

I thoroughly enjoyed this story.  Valerie's stories were amusing, but not so far fetched that I doubted them, rather I felt that they must have been based on some nuggets of truth.  Meg must have been a sensitive child.  When she repeated some of these stories at school, her class mates  poked fun at her for not realizing they were made up.  This led Meg to adopt a scientific approach to everything.  She shed her imagination and instead saw every thing a very sterile black and white, even when it came to romance.  How boring.

There was a lot of wonderful food described in this novel, but it was not overwhelming to the story line.  Meg and Valerie would spend all day cooking, eat very little and then the food would just seem to disappear.  It was later in the book that the destination of this food was revealed.

I was surprised to learn that this is a debut novel.  It has all the right things, character, locations, back stories, that make me want to read more by Maria Goodin.

Thanks to Sourcebooks for my review copy.
Posted by Heather at 08:00

Great review, Heather. It sounds really good. I love the cover and the title, too.

I think I finally figured out why I haven't been getting offers for these types of books. I overlooked an email that was sent out in January. I just emailed Danielle to see if I can be added to the list. *fingers crossed*

Great review, this sounds like my kind of read. Thanks for pointing out the differences in titles - bad enough when books are available with different covers depending on the market they are intended for, to have different titles is even more confusing .... or is that just me?

This sounds like an interesting read. I am preparing my books for summer reading! Ahh . . .

Heather, enjoyed your review. Feel free to link it in to Books You Loved. Either the May one or the new one which will come along on the 9th. Cheers