A Winter Kill by Vicki Delany 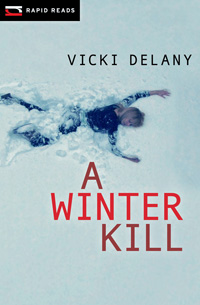 Constable Nicole Patterson has only been with the OPP (Ontario Provincial Police) for six months, but she know a dead body when she sees one.  After finding the teenage girl's body, she can't let the case go.  She knows that the detectives will follow up any leads, but she can't stop asking questions.

Just like Nicole, I couldn't let this story go.  I read it in one short sitting and was captived.  This title is part of the grouping of books called "Rapid Reads" from Raven Books.  They are aimed at readers with low skill or confidence, or for those who want a quick read.
Within a few chapters,  I felt as though I knew Nicole.  I could understand her position within her small community and how she felt most comfortable approaching her lifelong neighbours and asking them about the teen.  The story progressed quickly, but did not feel rushed or as though it was missing anything.
Author Vicki Delany also has a number of full length novels available, stand alone and series.  I'm looking forward to reading In the Shadow of the Glacier, the first book in the Smith and Winters series.

Thanks to Orca Books for use of the cover image.

Him Standing by Richard Wagamese
The Spider Bites by Medora Sale
Posted by Heather at 08:00