The Spider Bites by Medora Sale 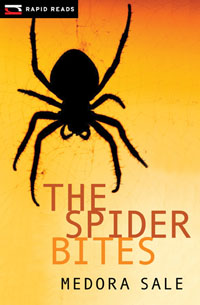 As I finished reading this book, I was left with the impression that Agatha Christie would have been impressed.  In classic 'who done it ' form, the suspects were all gathered together for the 'reveal', though not in the sitting room, but in a coffee shop.  Very Canadian.

Much of the story focused on Detective Rick Montoya and the reasons some one might have had for killing him after he'd already been framed for other crimes.  I was so focused on that story line, that I failed to take sufficient note of other developments.  I rarely deduced Ms. Christie's revelations, and it was no different here.  I'll admit to being pleasantly  surprised by the ending.

This was a good, quick read from Raven Books Rapid Reads series.  These books are directed at reluctant or low level readers, though they also appeal to readers with a short time to read.

Thanks to Orca Books for the use of the cover image.

Him Standing by Richard Wagamese
A Winter Kill by Vicki Delany
Posted by Heather at 09:19

Not too sure that this is one for me but I know several readers who would love it so thanks for the recommendation Heather.