Once by Morris Gleitzman 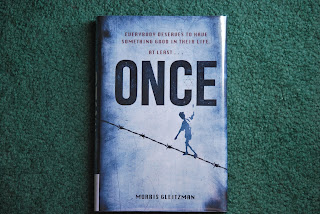 At first, I thought this was a straight forward story about a young Jewish boy who had been placed in a Catholic orphanage by his parents at the start of WWII in an attempt to protect him.  After three years and eight months, Felix decides to leave and go in search of his parents.  It started to get complicated, when I realized that Felix has no idea about the war and what the Nazi's are really up to, he thinks they are just burning books.

As a parent/care giver, you try and do the best for your children/charges.  How much do you tell them regarding events in the wider world.  I was torn about the nuns keeping the kids in the dark regarding the war.  You want the kids to still be kids and not worry about things they can't do any thing about, but should they really be kept in total ignorance.

As I continued to read, this seemingly simple story got more complex and emotionally harder to read.  I feel that it would be a good selection  to read with your child rather than letting him  or her read it alone.  As a parent, you might want to read ahead so you are prepared for possible questions.

Once is the first of a four part series, followed by Then , Now and After.