The Rosie Project by Graeme Simsion 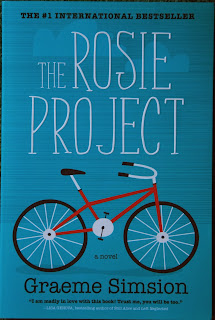 I've been looking forward to this book since I first heard about, and I am happy to report, that I am not disappointed in any way.  I loved it and didn't want to put it down, but  I didn't race through it as I knew that I wouldn't want it to end.

Don Tillman is a professor of genetics at a university in Australia.  He has a very straight forward approach to life; he has a strict schedule and every thing he undertakes has a specific purpose or goal.  I became obvious to me almost immediately that Don has autism, more specifically Asperger Syndrome, though he doesn't realize  that.  At first, I felt that the narration was a bit stilted and uncomfortable, but quickly realised that it was the character of Don who was so rigid with no emotion to colour his words or activities.

He has reached that point in his life where he wants a wife and is determined to launch a project to find the perfect candidate.  To further this goal, he enlists the aid of his two friends, husband and wife Gene and Claudia.  The project takes a twist when Gene sends Rosie to Don with a genetics question and he mistakes her for a 'wife' candidate.

From the point of their meeting, we get an inside view of the development of their friendship even though Don has dismissed Rosie as a potential mate.  If I were to interview Don and ask him how a person makes friends, he would undoubtedly give me a very specific list of activities and dialogues that would have to occur, but in reality, they seem to develop over time due to repeated associations.  I really can't look back at any of my friendships, and pick that one day where we went from acquaintances to friends.  That is essentially how his relationship with Rosie proceeds.

Don lived a very structured life before he met Rosie, and through out the novel, he had several talks/debates with himself about changing his plans/schedules.  This is very realistic as I have found that I also become set in my ways and that I need to kick start myself and try something new and different every so often.

This is a wonderful presentation of two very different people developing a relationship and how they accommodate each others uniqueness.

I also want to congratulate Mr. Simsion for his use of humour.  This book was funny and had my laughing out loud at parts and credit to the author, that it was always the situations I was laughing and never at the person involved.

Author Graeme Simsion is currently working on his next two novels, tentatively titled: Walk to the Stars and The Candle.  Publication dates have not yet been set.
Posted by Heather at 15:54

Great review, Heather. It sounds really good! I'll keep an eye out for it.

My signed copy of The Rosie Project arrived yesterday. I belong to the first edition club at Book Passage and never know what's coming next. After reading your review I'm excited to start this one. Thanks for the tip about the opening narration too - I'll keep that in mind.

What a nice review! Not usually my "flavour", but I'll definitely consider giving this one a read based upon your review.

THANKS. This sounds very good.

Have a great rest of the week.

Stopping by from Carole's Books You Loved November Edition. I am in the list as #28. My book entry is below.