The Dragon Head of Hong Kong by Ian Hamilton 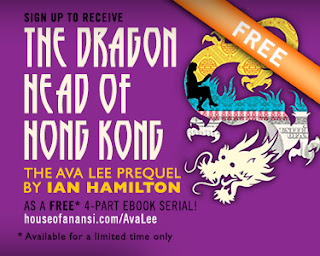 Ava Lee is the most kick-ass female character I have encountered in a novel in ages.  She is the hero of Ian Hamilton's  six Ava Lee novels.  I earlier reviewed the first book in the series, The Water Rat of Wanchai.

I just received an email from House of Anansi that Mr. Hamilton has written a prequel to the series, and that for a limited time, this will be available free.  You do need to sign up to receive this 4 part story.  Click this link to take you to the sign-up page.

Need more to tempt you, read what the publisher has to say about the incredible Ava Lee:

About Ava Lee
Ava Lee is a young Chinese-Canadian forensic accountant who specializes in recovering massive debts that aren’t likely to be recovered through traditional methods. In the first book of the Ava Lee series, The Water Rat of Wanchai, her character takes shape through learning about her traditional Chinese upbringing, her family dynamic and the people that are most important to Ava.

Independent, intelligent, and creative in her methods, Ava does whatever needs doing to get the job done. Ava’s motto is: “people always do the right thing for the wrong reason.” Her challenge is to always find that wrong reason. Even though she’s petite, it’s a serious mistake to underestimate her physical abilities. She is well trained in martial arts and uses her abilities to get her out of dangerous circumstances. She is also accustomed to working alone, to the point of obsession, which becomes interesting when she is forced to negotiate with powerful and unfamiliar alliances to get the job done.
There are currently five books in the Ava Lee series, with the sixth (The Two Sisters of Borneo) set to release this fall.