Wow, this was a bonus month, I sewed non-stop, even in my sleep, or at least it seemed that way.  Having only joined in September, I didn't expect that I would complete the challenge, but I could at least make a good show of it.

My most pressing project was to complete the remaining 44 mini star blocks for my Saturday Morning Quilt Class.  I showed these in an earlier post. 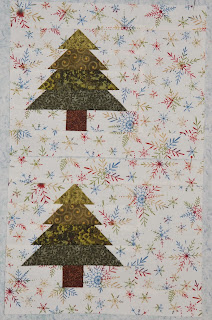 Next up, two Christmas tree blocks for mug matts. These are adapted from a pattern by Connie Kresin. I don't collect Christmas fabrics, but I do purchase snowflakes when I can find ones I like.

At some point in every project, you have to sew the blocks.  Finally, I was able to finish the blocks for two long term projects.  First, 10 Double Nine Patch blocks and then 55 leader and ender blocks.  Both of them are featured in an earlier post. 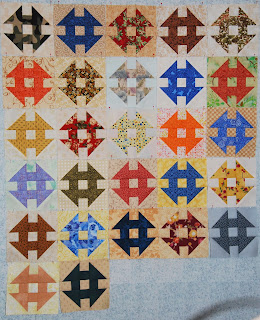 A third long term project still needs a bunch of blocks, but I was able to piece 27 additional mini churn dash blocks.  This project is complicated by my not wanting to repeat any of the fabrics (oops, I did make one mistake this month). 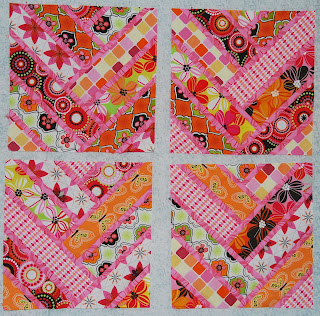 And to round out the month, while I was blog hopping, I was again at Connie's blog, Free Motion by the River and saw the table runner she made with two broken herringbone blocks.   It's shown in the banner at the top of her blog.  Well, I had a bit more fabric than I thought, and was able to piece 4 blocks.  I have some ideas for using them in a lap quilt, stay tuned in the next few weeks for it's progress.

Did you keep track of the numbers as you read, that's 142 blocks for the month of November.  My total for the challenge is 355 blocks.

Now to finish the tops and get them quilted, and I won't be joining a challenge for that.  I have a problem when I join a challenge, I take it seriously and it bothers me when I can't complete it.  Yes, I realise that these challenges are supposed to be fun a encouraging, but that still doesn't stop me from taking them seriously.  I am glad that I joined in as it really did help me move forward on some languishing projects.  Thanks to Shelly at Prairie Moon Quilts for hosting.

You're welcome, and you did fabulously for joining in so late! Wanna do it again next year? I doubt you'll have any problem getting 350 in an entire year!