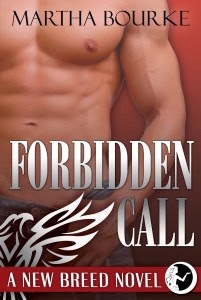 According to the Mayan calendar, the world changed on December, 21, 2012.  The effects are showing in Boston, Massachusetts where the Order is trying to keep ahead of Toltec and his destructive forces.

New Breed Warrior, Soaring Eagle (SE) has been saved from a senseless death by his mortal enemy Ana.  While suffering amnesia, he falls in love and finds himself mated to her.

Forbidden Call is the first book in a new adult series by Martha Bourke.  The second title in the series is Deadly Call.  These books follow a story line started in her YA series Jaguar Sun.  While the author indicates that the reader doesn't need to read the Jaguar Sun series, I felt quite lost in the story line, not knowing who Toltec was and how he fit in with the shifters and hellions.

This is a well thought out story line and the sexual tension between Ana and SE kept me reading late into the night, I just had to know what was going to happen next.  There are several descriptive sexual scenes that serve to further re-enforce  their relationship.

The story ended on a high note which answered a few questions, but it left even more open ended and begging for a follow-up.

Thanks to author Martha Bourke for use of the cover image.
Posted by Heather at 18:48