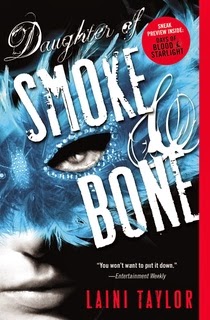 This is one of those stories that reeled me in, the longer I listened to it, the more I wanted to just sit there and listen.  It wasn't any one incident but rather an accumulation of little mysteries, intrigues.

The story starts with Karou, a seventeen year old girl who is attending art school in Prague who has a compelling encounter with a beautiful man on the street.  Soon we meet her unique 'family', involving seemingly whimsical characters or Chimera we are told later.  Then there is her father  figure Brimstone, who is best described as a demon.  Finally, there is Akiva, a too beautiful man, who casts aside reason and his most important task once he sets his eyes upon Karou.

With this intriguing assortment of characters, I had no idea of where this story might travel, and travel it did.  Karou could move around the world through a series of magical doorways that all started at Brimstone's shop but opened around the world.  I particularly enjoyed the descriptions of Marrakesh, which evoked for me the feelings of the markets there.

I listened to the audio book which was read by Khristine Hvam, for which she won and Audie Award.  She has read for over 100 audio books.  The voices that she made for these varied characters really did bring them to life for me.  This unabridged edition is 12 hours 33 minutes.

The end of this book does answer some nagging questions about Karou and her history, but it leaves many more open.  The story continues in Days of Blood & Starlight and then in Dreams of Gods & Monsters which is due for release April 8, 2014.

thanks to Hachette Book Group for use of the cover image.
Posted by Heather at 12:35

Some of the nights when I can't get to sleep I think of having a good audio book like this. At least you convinced me to check out the audio visual section of my library and thanks for that.

Are you a Jonathan Kellerman fan?
My wife used to be but decided she didn't want his books any more so this weekend we're taking 7 signed first editions to a book store to see if they might be interested.
At one point in mid career, I dreamed of retiring and opening a book store, who would have imagined the health issue I'm dealing with.
Mike

Sounds intriguing. Thank you for sharing your thoughts.