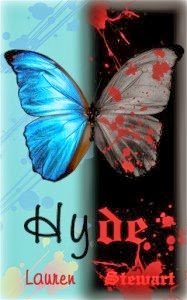 I reached a certain point in this book and I just couldn't put it down until I was finished in the wee hours of the morning.  I don't regret staying up that late at all.

I believe that we all have our good and bad sides, but for Mitch Turner, his good side is rather nasty and his bad side is super bad, bad, bad.  He has turned bad into a career as a successful life coach, not a life is sweet and apple pie kind but a nails and daggers one.

The sweet and apple pie belong to Eden Colfax.  She is the type of girl that you want to introduce to your mom.  She doesn't lie, curse or party her nights away.  Life seems to be everything she wants until she wakes up one morning  in bed with Mitch.    I was hooked from that moment.  How could such a good girl pair up with him, OK, with gorgeous him.

Since he was a teen, Mitch has known that at certain time, he transforms into a brutal persona he's named Hyde.  He does whatever it takes to keep him at bay, even enlisted the aid of his secretary Jolie (she has secrets of her own).  His well structured life is thrown into chaos after meeting Eden and all he wants is to get her out of his life, but she keeps barging back in.

This is not a re-telling of Robert Louis Stevenson's 1886  book The Strange Case of Dr. Jekyll and Mr. Hyde.  Rather, it is a love story, a story of trust and betrayal, and a story of secrets.  Note that this is an adult novel and is not suitable for younger readers due to mature language and sexual content.

Mitch and Eden's stories continue in Jekyll and concludes in Strange Case.

At the time of writing this review, the ebook of  Hyde: an Urban Fantasy is free from a number of  online retailers.

Thanks to author Lauren Stewart for use of the cover image.

Thanks for such a great review, Heather! I'm really happy you enjoyed the book. I hope you enjoy the others as much (or more).