Without by Glenis Stott 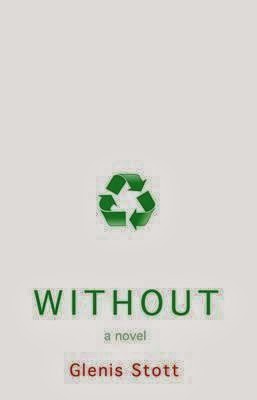 It was the cover of this book that caught my attention.  It's clean and to the point and, being an environmental studies grad, I couldn't pass by.

Daily life in England some 30 years after the Upheaval is still recognisable, but there are some noticeable differences.  There is nothing new, everything is used, re-used and then re-used again and again.  All manufacturing has ceased and residents of England are dependent on the cast offs of their neighbours, but many items are becoming un-usable.  The structure is pushed to the limits and something is bound to break.

Celia and her husband Robin have been feeling this strain and are no longer complacent about their lot in this well ordered life.

This new society didn't really seem like much of a stretch from being possible.  Some people would come out better and others would be worse off, but on average, would most people really notice especially after a few decades.

I liked the way that author Glenis Stott introduced the concept of no choice in your life and that there was no benefit to people taking initiative.  Even that the population in the cities were losing the basic skills of how to care for their belongings, since nothing belonged to them.

This novel is an example of the characters within the book carrying a good concept too far.

That sounds really interesting -- I just went and ordered it for my Kindle. :-)

As you say a great cover,simple and yet eye catching all at the same time. Its a shame that you felt the book a concept too far.