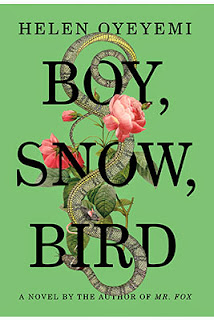 The premise of the book was very appealing to me, a white woman marries a man who appears to be white and then gives birth to a coloured daughter.  Lots of possibilities begging to be explored.  Unfortunately, I didn't like the main character Boy Novak.  Beyond being pretty and fair, there just wasn't anything to her.  I couldn't relate to her in any way.  She had no convictions, nothing that she believed in , nothing she championed, nothing to like about her.  She was just as transparent as the mirrors and shiny surfaces she kept gazing into.

Boy's in laws were only concerned with image, what other people saw them as.  Not my kind of people in the least.  So very careful about everything they did so as not to rock the false boat that they found themselves living in.  I can understand why they choose to live that way, but to not have included Boy in their secret, that was wrong.

I did enjoy the character of Bird.  She seemed like a delightful child who was able to be herself, though she was conflicted by the obsessions of her family.  Of all the people in the book, she struck me at the one most capable of being truly happy.

I do think that I would have enjoyed this book more if I'd been reading it with a group and been able to discuss the whats and whys and the historical context of the events.  It would be a wonderful selection for a book club.