Saints in the Shadows by Alana Cash 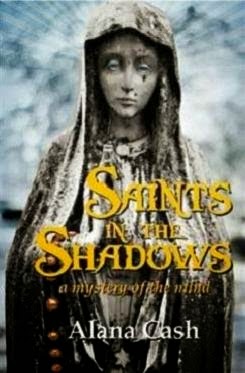 After her father's untimely death in New Orleans, Maud travels to New York city to continue her studies in fabric design.  She doesn't make it to the classroom, and instead finds herself working as a barrista during the day and as a waiter in a very exclusive restaurant on weekends.  This second, well paying job, allows her to rent an apartment in a converted house.  Maud is un-nerved by her new neighbour Lina and her alter ego Madame Budska, who works as a psychic.

For as long as she can remember, Maud has had dreams that seem to be sending her messages, prophetic messages.  While Maud ties to ignore these, Madame Budska encourages her to pay attention to the meanings hidden within.

I loved this book.  I felt quite comfortable with Maud and wanted to join her at Lina's for tea.  If Lina were my neighbour, I know that I'd be confiding in her almost from that first meeting.

As much as I loved the story, there was a section near the beginning where the writing was a bit choppy.  It was only a short section and it didn't interfere with the story telling.

It is an interesting selection of clients that visit with Lina or should I say Madame Budska.  They each have very public personas, but as Maud gets to know them, she realises those are mostly facades and don't fully reflect the inner person that is kept well hidden from the public.  Even Lina presents two faces and the reader is left to determine whether there really is a division between the two.

When I was about two thirds through the book, I found myself already hoping that there would be a follow up story.  I want to know where Maud goes from here, how her relationship continues with Lina and what about her love life, will that budding romance find a way to flourish.

Madame Budska is a worldly woman and has her own Facebook page where you can "Like" her and then join her for virtual tea like I did.  If after meeting Maud and Lina, you want to read more of their stories, you can leave a message with Madame Budska and she'll pass it along to author Alana Cash, perhaps via one of those dream messages.  At present, a second book is not in the works, but when I asked Alana, she said she is certainly open to the idea.

Trailer for the Saints in the Shadows

Thanks to author Alana Cash for my reveiw copy and for use of the cover image.

You might like Saints in the Shadows if you enjoyed The Restorer: The Graveyard Queen series by Amanda Stevens
Posted by Heather at 12:40