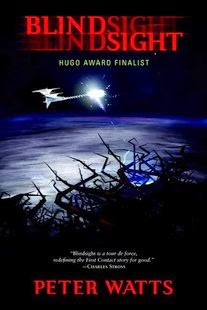 Blindsight is the first book of The Theseus Consortium.  It follows the ordeal of Siri Keeton as he travels beyond the reaches of our universe to determine the nature of the earlier appearance of alien technology around the earth.  He is accompanied by a crew lead by a long dead and resurrected vampire, a group of four linquists/first contact specialists in one body, a medical scientist and a military strategist.  Siri is a synthesist, whose job it is to observe and send home reports.

This is first and foremost a story of first contact. The tough part was to identify the alien(s) and distinguish between smart technology and sentience.  While the reader is following the story of the aliens, we are also learning about Siri, his life and how he fits in with the rest of the crew.  It's a very different world than the one we live in now.  People can be moded with all sorts of implants though I am left wondering whether that makes them more or makes them less human in the end.

I enjoyed the path of this story, but will admit, that at times I couldn't follow whatever philosophy Mr. Watts was discussing.  Several time, Sarasti, the vampire, had to lead Siri to understand something.  This something was never stated, I imagine that I was supposed to be able to follow the logic and figure it out myself, I never did.

Why does one resurrect a vampire?