The Hundred-Year House by Rebecca Makkai 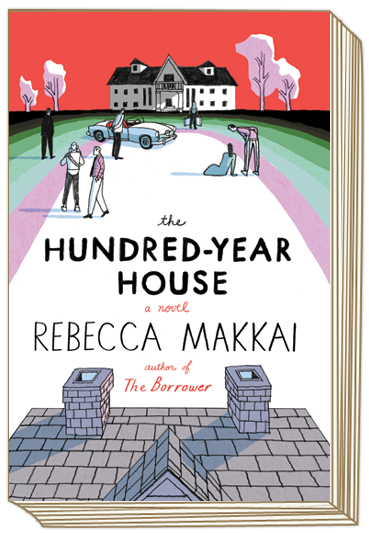 Generally an author starts at the beginning of a story and proceeds to the natural ending. In this instance, author Rebecca Makkai has successfully done the opposite. She has started near the end, just prior to the turn of millennium and the threats of the Y2K bug.  Zee and her husband Doug have returned to her childhood home and taken up residence in the former coach house.

For many years there had been an artist colony housed on the grounds, and Doug is obsessed with gaining access to their files.  Somehow he must find a way past his secretive mother-in-law's guard. A fateful confrontation with her  on New Year's Eve and a serious mis-communication  leads to even more questions rather than the long sought answers. Once this time line draws to some reasonable conclusions, Ms. Makkai skips back in time to when Zee's parents first arrive at the house over forty years earlier.  Once again, we are treated to some revelations but also to further questions.   This process repeats back through the hundred year history of the house.

I have to admit that I really didn't like most of the behaviour of the modern residents.  They all had secrets they were keeping and when they did talk with each other, they were poor communicators.  More walls than openings.

Once we had travelled back to the arrival of Zee's parents  at the house in 1955, I got more interested in what was happening.    I still didn't find Grace and George to be likable people, but at least I could understand their behaviour.  From this point, the secrets and the revelations just kept getting more fascinating and unexpected till the point where I could hardly put the book down.

It was interesting to have this look inside the artist colony and see the interactions between the various guests.  I can imagine that such  interactions could certainly spur their imaginations and output.

There was an intriguing sounding cocktail mentioned in the book, White Lady, and I had to verify whether it was a creation by the author or a real drink.  It was easy to check and it certainly does exist.  I love that mix of fiction and real.

Mix in a shaker with ice, strain and enjoy.

Thanks to Penguin Canada for use of the cover image.

#HundredYearHouse
Posted by Heather at 08:00

Thank you for this review, a new author for me.

A novel I've been hearing lots about and yet it doesn't appeal to me at all and I think you have summed up why.

A big fan of good characters, I've heard it several times that the characters in this or neither particularly likeable or even well written.

Not one I'll be reading any time soon, thanks foe sharing your thoughts and confirming what I was worried about.