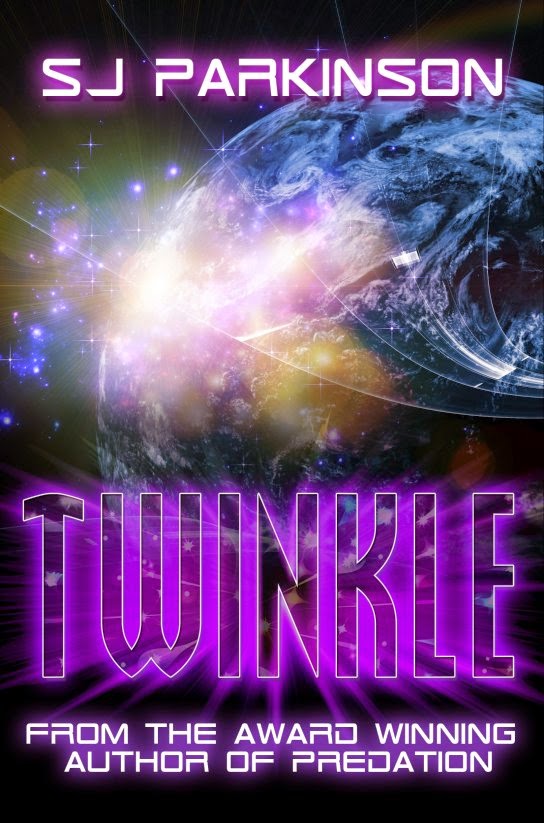 I love watching fireworks, from the brilliant sparkles to the reverberating explosions.  They are like magic, dancing across the sky.  Author SJ Parkinson envisions fireworks with a more sinister motive in his newest novel Twinkle.

On July 4, Sir Marcus Brandon, the wealthiest man in the world, wants to celebrate the launch of  GNI, (Global News International) with a fireworks show.  To ensure worldwide enjoyment, he has arranged for it to be shot from satellites in orbit.   Inexplicably, all who viewed the fireworks start to go blind twenty-two hours later.  Only a handful of people around the globe, those who didn't view the fireworks, retain their vision.

This book is  set in the United States, but easily could have been  located in any of the world's major cities.  Much of the plot is centred around various levels of the military and the President, though the medical and general public are critical to the plot.

While I don't usually read military inspired stories, I was captivated from the first pages.  For two days I couldn't put this book down.  The military discipline and procedures worked well in this story. I wasn't lost by the unfamiliar terms, locations or processes of NORAD or the army/navy as Mr. Parkinson included succinct footnotes that answered my questions before I even knew to ask them.  Security surrounding the American President was paramount in this plot and explained equally as well.

Twinkle is fast paced, occurring over the course of a two week span.  There are frequent jumps between the main characters and locations, each is easy to follow and there doesn't leave gaps in the narration.   Even though the story moves along quickly, there is sufficient detail such that I felt as though I knew several of the characters.  My favourites being: Dr. Krause who was working to cure the blindness, Oscar Blake who was a patient of the doctor and missed the fireworks, and Colonel Alvin Smith who was on duty at NORAD during that night.

I recommend reading the author's end notes where he provides additional information clarifying fact from fiction  with regard to both the blindness and the military.  This is a well contrived story and should appeal to a wide range of readers.

For a chance to win a copy of Twinkle and four additional books by SJ Parkinson, use the Rafflecopter form below.

Thanks to Virtual Author Books Tours and author SJ Parkinson for my review copy.
Posted by Heather at 08:00

Thank you for your positive review and kind words. I'm glad you enjoyed Twinkle and hope you have a great week.

I appreciate your hosting my Twinkle book blog tour.

Thanks for taking part in the tour. I'm so glad you enjoyed 'Twinkle'!

It sounds like it starts with the same premise as Day of the Triffids, but then goes in a completely different direction. Fascinating!

Oh, as much as I love fireworks unfortunately my asthma doesn't. Sounds like a great book, good luck to all those who enter the giveaway.