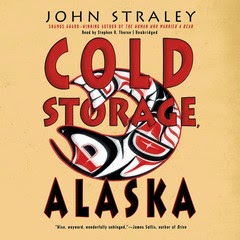 This audio book was wonderfully entertaining and I kept making excuses to keep listening.  At first I thought it was a story of good brother versus bad brother.  As I kept listening, I realised it went a lot deeper than that.

Clive McCahon has served his time for dealing drugs and now wants to return home to remote Cold Storage, Alaska to open a bar/church.  His brother Miles, the town medic, is unaware of this until a state trooper, bent on re-arresting Clive, fills him in.  Fishing is the largest industry in Cold Storage and trooper wants to ensure that Clive doesn't bring any of his drug dealing ways with him.

From the moment Clive and his uniquely ugly dog step foot on shore, all plans seem to take on a life of their own.  The arrival of ones of his pre-jail associates complicates matters, though not in expected way.  A series of comic mis-adventures doesn't hurt either.

Cold Storage is a remote community with access either by water or air.  City people can't envision themselves wanting to stay here, but it has a knack for getting under their skins and they find it hard to leave.  Perhaps it's the sense of caring practised by the residents.

Author John Straley has turned a cold, isolated community into an inviting yet funny family.