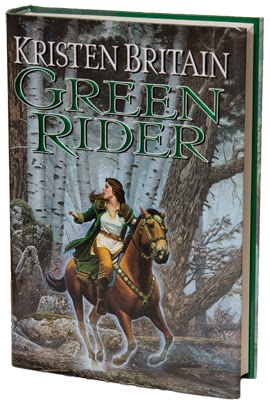 I could hardly put this book down, and that's saying a lot since I have previously read it two times. Karigan G'ladheon has faced life threatening challenges since she ran away from bullies at her boarding school and I can't help but cheer for her.

The lands of Sacoridia are bounded by magical  D'Yer Wall that has stood for a thousand years.  It has served to keep the nightmare creatures of Kanmorhan Vane out, but  the Gray One has breached the wall.  I had hoped that the wall would be more involved in this story, but that comes in future books.  The Green Riders are the main theme.  They are the legendary couriers of the lands, though their reputation has tarnished over the centuries and their role in the liberation from evil has been forgotten.

This book has many of the features I look for in a good book.  A strong female character, a good cast to support her, magic that keeps me guessing and a wonderful setting.  The land of Sacoridia is realistic in many ways, yet the possibility of magic adds numerous twists.  I had one problem with this created world. The road that Karigan travels from school to the capital city is impossibly long compared to those travelled by he father.  Unfortunately there is no map of the lands included in the book, so I have to imagine that the route she took was the 'milk run' that passed through all the out of the way towns.

Karigan does a lot of growing up in this coming of age story.  From school girl to respected Green Rider, she faces challenges that might have thwarted vastly more experienced adults.  True to form for a teenager, she says she wants travel and adventure and then when she's presented with it, all she wants to go is go home.

I first read this book shortly after it was published in 1998 and I feel that it still reads well for a debut novel.  If it were to be published now it would probably fit in the YA category.  The story continues in First Rider's Call.

Just bought it. Thanks for the review

Sounds like my kind of read, definitely one I'll make note of for possible future reading.