After the Fires Went out: Coyote by Regan Wolfrom 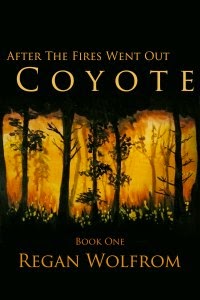 Imagine for a minute, that a comet has struck the earth and the devastation has left a remnant population.  What to do?  This book focuses on a several groups of survivors in the area of Cochrane in northern Ontario.  For the most part, they are people just wanting to provide for their families, but some of them are wanting more.  They want the power and control over others.

Baptiste doesn't want this kind of power even though others keep attributing 'hero' status on him.  Individuals and families have gathered around him seeking his guidance and protection.   Baptiste years to get back to his family in Toronto though knows that is not at all likely.

While we don't learn much about what happened to the world, it doesn't really matter for the telling of the story.  What matters in the interactions of the various groups.  Some just want to be left alone to survive, such as Baptiste,  and others continually want more even if it at the expense of others.  And then there are those who will kill anyone who gets in their way.  It was interesting to see all these different approaches and relate them back to what I know of the real world.  Some approaches were destined for diasaster.

There is also a theme of forgiveness.  What actions could you forgive in another.  Baptiste is confronted with this question time and again and is pushed to consider it even when he wants to push it away.

This was a good story but I didn't form a connection to any of the characters.  Yes, they all experienced losses, but none of them stood out more than the other. Nothing pulled on my heart strings.

At the time of writing, this ebook is free at some online retailers.

Thanks to author Regan Wolfram for use of the cover image.
Posted by Heather at 08:00