The Restorer and The Kingdom by Amanda Stevens 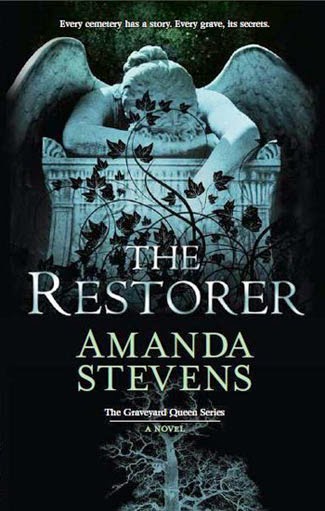 I had no idea that there were people out there who worked to restore graveyards.  Not something I had ever considered. I would worry about being alone in some dark, creepy corner and having someone sneak up on me.  As it turns out, Amelia Gray has the same feelings, though for different reasons.  Since she was young, she has been able to see ghosts.  Her adoptive father can also see them and has given her a set of rules to live by.
While she is working at Oak Grove Cemetery, a body of a young woman is found.  Not only does this complicate Amelia's job, but it also brings her into close contact with a Police Detective who is being haunted by his wife and daughter.

I was fascinated by the entire plot of this story.  The idea of going into a haunted cemetery scared me, but it was this same creepiness that kept drawing me back into the book.  After reading The Restorer, I found out that this genre is known as Modern Gothic.

As the book proceeded, I found myself cheering for both Amelia and Detective Devlin. I am looking forward to reading more of The Graveyard Queen Series and following paths of their lives. 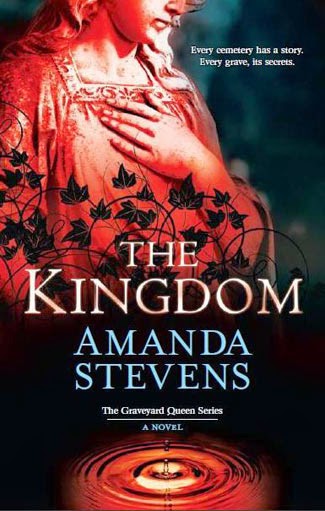 Amelia Gray's story continues in The Kingdom. She has been hired to restore a community graveyard in the isolated town of Asher Falls, South Carolina.  Almost immediately after her arrival, she sees her first ghost.  This doesn't bode well for the job she has ahead of her.

An important part of the restoration, is researching the history of the graveyard.  This should be relatively straight forward since every body in the cemetery is dead and their lives are closed. Written history, so to speak.  But it is made clear to Amelia that she would be better off not asking questions.  Now she has ghosts, the creepy Asher family crypt and people keeping big secrets, everything needed for a riveting read.

I love this book even more than The Restorer, the first book in the series.  The characters were more mysterious with quite varied backgrounds.  Each one of them took this story on many twists and turns that I didn't imagine.  The addition of the dog Angus, added a new dimension to the story which I totally enjoyed.

Book 3 is now available, and Amanda is currently working on Book 4, The Visitor, due out some time during 2015.

As I was reading The Kingdom, it made me think of Saints in the Shadows by Alana Cash, which I reviewed previously.  While both books had an bit of an other worldly feel, it was not the creepiness that stuck with me.  I was drawn to the main characters in both books, there was a warmth to them, the kind of warmth that had me wanting to invite them over for tea. I felt comfortable with them.  That is ultimately the best feeling I can get from a work of fiction.

Thanks to author Amanda Stevens for use of the cover images.