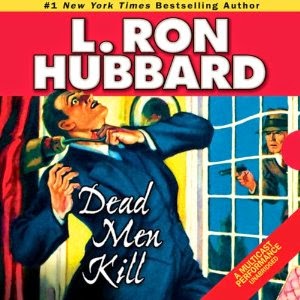 I had purposely avoided reading anything by L. Ron Hubbard due to his quasi religion.   I couldn't separate the man from the church he founded.  When Audible offered a free audio book download of Dead Men Kill, I thought it would be the perfect opportunity to determine whether there is any basis for my stance.  I'm happy to say, that in this case, there isn't.

Dead Men Kill is a police based mystery story.  Detective Terry Lane must find the perpetrator of several murders where all evidence points to recently dead men, in other words, zombies.

The slang is very dated, though accurate to the time when it was written during the 1930-40s. I wasn't able to find a specific year.  Likewise, there was one scene that would be totally unacceptable by today's standards.  When I heard it, it stopped me in my tracks, I couldn't believe what I heard.  I quickly realised that the book wasn't written recently and that it was most likely an acceptable comment at the time of writing.  I didn't let it stop me from enjoying the rest of the narration.

I found this an enjoyable story and it was greatly enhanced by the full cast dramatic reading.  The reading ran for just over two hours and was perfect listening for an otherwise boring drive.

A glossary for the slang can be found at Galaxy Press.

Thanks to Audible for the audio book and use of the cover image.
Posted by Heather at 08:00

Thanks for that review, Heather. I also have an audio book of his, that I have hesitated to listen to for the same reason. I'm glad to hear that it's not related to his religion.