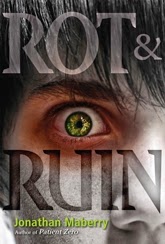 This is the quality zombie inspired novel that I have been waiting for.  Many books of the walking dead tell of mindless killers roaming every where wrecking havoc.  These serve as the backdrop to some other story about the survivors.   In this series, they are integral to the entire plot, not their activites, but how they are perceived and how they are treated.

Benny Imura barely remembers life before First Night.  That was the night everything changed, when the dead no longer stayed dead.  He's been living with his brother in a fenced community and now that he's fifteen, he's required to train for a job.  He tries many jobs, but none of them suit. He finally decides to do the last thing he said he'd ever do,  to continue in the family business of zombie killer.  That means spending days on end with his older brother Tom, who he views as a coward.

As the training progresses, Benny starts to see Tom in a whole new light.  He also learns much more about the world he thought he knew.

Through this story, author Jonathan Maberry considers the many ways that the survivors deal with the zombies from outright slaughter, to a compassionate approach that recalls that the zombies were once their family members, friends and neighbours.   He also looks at the variety of communities that have sprung up, several of them were not ones that I would have considered at all.

This book is well written and should appeal to it's target YA audience.  I am looking forward to reading the further books in the in the series.

I don't read YA books and I don't read zombie books BUT I read this one and I thoroughly enjoyed. I recommend this as a book to people who don't usually read the genres.

Ah I'm so glad this is a good book, I picked it but only because it has zombies in it! Now I'm really excited to get to it!