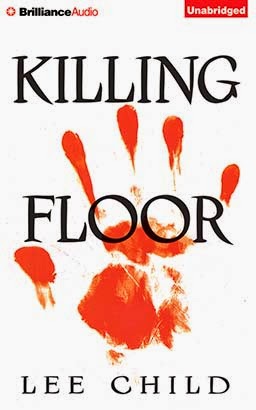 I loved every minute of this audio book.  I listened at each opportunity and frequently found myself walking longer each day so I could listen to an additional chapter or three.

Killing Floor is the first book in the Jack Reacher series by Lee Child.  Jack finds himself in Margrave, Georgia enjoying a quiet breakfast washed down with the best cup of coffe when the police show up, guns drawn, and arrest him.  He is accused of a brutal murder that took place the previous night.  Now it's up to Jack to find the real murderer in order to prove his innocence.

Jack is ex-military. One of those guys that you can count on.  At critical plot moments, I found myself  yelling out loud and cheering for him. Not a good thing when hyou are reading in public. I can't decide which supporting characters I loved most, the Harvard educated Detective Findley or Sergeant Roscoe, a blossoming love interest to Jack.  The two old guys in the barber shop added warmth to a town that needed something real and not the phoney cheerfulness that excessive amounts of money can buy.

This book was read by Dick Hill.  He has the most amazing voice.  He has been named a "Golden Voice" and "Voice of the Century" by Audiofile magazine.  If I didn't know better, I would insist that James Earl Jones spoke the dialogue of Detective Findley.  The audio book is from Brilliance Audio, runs 15 hours unabridged.

I am a Reacher fan! I've read almost all of Lee Child's series and can't wait for the next one.