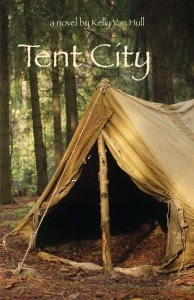 A plague of locusts has destroyed  the world's crops leading to devastating food shortages.  So many people have died that the very survival of the human race is in doubt.  On the eve of the establishment of safety camps for young people, Dani and her little brother Brody, flee their home seeking safety in the Black Hills of South Dakota.

The two can't possibly survive without the help of several other teens.  Kit has been Dani's friend for years, while others such as Bentley, Jack and Callie are new friends.  Together, they form a cohesive group with many strengths.

I enjoyed reading this story and felt that much of it was quite plausible.  Yes, older teens could be sent off on their own to survive, some being more capable than others.  Their banding together seemed a natural response to their situation.

The setting of the Black Hills is practically a magical place to me.  I know it only from the Beatles song "Rocky Raccoon".  It is a vast, under-populated area with lots of hiding places. A great place to hide.

Were the locusts a natural occurrence or a biblical plague.  Religion does play a role in this story, though not in a persuasive way, rather as the belief/practise of a segment of the characters.  It is yet to be told how much of a role it truly plays in the development of the plot or if it really is just and excuse for men to behave badly.

I look forward to this story continuing in the next book Red River.

Thanks to author Kelly Van Hull for use of the cover image.
Posted by Heather at 17:39