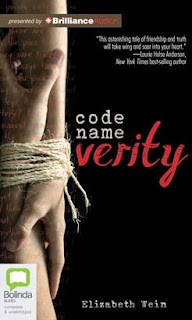 This is the fictional account of two young women who meet during World War Two in England.  One longs to use her pilot skills to aid the war effort and the other, she can imagine other ways to put her language skills to use,  As the war continues, their friendship deepens and their involvement moves to new levels not typical of women at that time period.

This is a well crafted story, first told from the point of view of Verity and then later from that of Maddie.   Unfortunately, this story didn't capture my interest nor imagination.  Code Name Verity is part of author Elizabeth Weir's Young Pilot Series.  For those with an interest in flying, they will find this book very attractive.  There is a wealth of knowledge about WWII era planes and their role in the war effort.

If I had been reading a paper version, I doubt I'd have made it past the first few chapters.  I listened to the audio from Bolinda Audio. It was a free download   from SYNC, a summer audio book program aimed at  YA readers.  The program continues this summer with 28 additional titles.  I wrote about it in an earlier post.  Readers for this book are Marven Christie and Lucy Gaskell.  They did a excellent job and kept my attention with their voice characterisation of the men and women as well as the French and German accents.

Thanks to Bolinda Audio for being part of the SYNC program and for use of the cover image.
Posted by Heather at 17:08

I read this awhile ago and liked it very much. The setting and background is a favorite genre of mine