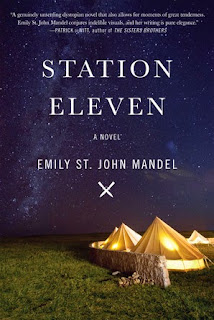 I was disappointed in this novel.  From the advertising and write ups I had read, I was expecting a post-apocalyptic story. What it turned out to be was a biography of a fictional actor who was possibly the last celebrity to die before the onslaught of a virulent pandemic.

The opening chapter was most appealing and had me eagerly reading.  A paramedic in training was attending a theatrical performance when he noticed that the lead actor was suffering  a medical crisis.  His attempt to resuscitate him was unsuccessful.  Shortly after he left the theatre, a former colleague called him and told him of an extremely aggressive flu  at the local hospital.  He warned him to prepare for the possible crisis.  And then we don't hear from this character for twenty years.

What followed was a disjointed series of stories about Arthur's past interspersed with glimpses of the daily life of a band of actors and musicians as they travel from one settlement to the next.

In the end, the stories did come together, but it wasn't enough to overcome the confusion that I felt for the preceding three hundred pages.

This book has been selected as the One Book One Community Read for Waterloo Region where I live.

Thanks to HarperCollins Canada for use of the cover image.