Cathedral of the Sea by Ildefonso Falcones 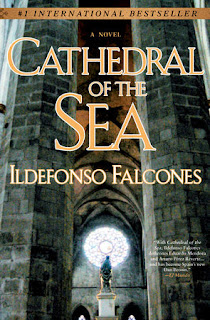 The book starts in 1329, the same year that construction began on the Cathedral of Santa Maria de la Mer, in Barcelona, Spain.  The son of a serf, Arnau Estanyol's life was difficult from his first breaths.  His mother was raped by the wealthy landowner on the eve of her wedding .  Later, his father was forced to abduct him and they fled to Barcelona.

As a young boy, he met and befriended a child, Joanet, who would become his best friend .  Together, they explored Barcelona and learned of it's treasures and some of it's secrets.  The most important to them was the church of the Virgin, The Cathedral of Santa Maria de la Mer was under construction and the two were fascinated.  Their lives became entwined with the progress of the building.

I read this book steadily for a week, pushing aside other obligations to gain more reading time.

Themes in this novel include: love, longing for family, revenge, religion and honour.  Arnau is an honourable man and one of the most widely respected of Barcelona's citizens. From his lowly beginnings offering water to the bastaix who were carrying stones for the cathedral, to that of Counsulate of the Sea (magistrate) he never looses site of his humble birth.   He is the kind of man that I want to know.

A book this long also needs a villain.  That roll is filled by the nobles, who are self centred, with no concern for those in their care (the serfs) , and no thought to the future. The Inquisitor of the Holy Office, Nicolau Eimerich, is a horrid person but so well written that I could actually imagine him presiding over the hearings.

I found the treatments of the Jews disturbing, though it is accurately retold from historical documents.  Author Ildefonso Falcones based the book on a historical events though some liberties were made to accommodate the story line.

This is a well written, in depth book that conveys the difficulties of life in 14th century Spain.  The descriptive passages , particularly of the church, left me feeling as though I really was there. I highly recommend this book for fans of history and those interested in learning more about Spain.

Cover image courtesy Penguin Books.
Image of the cathedral from Wikipedia.
Image of the bastaix block from the website of the Basilica Santa Maria del Mar.