The Wolf and Me by Richard Scrimger 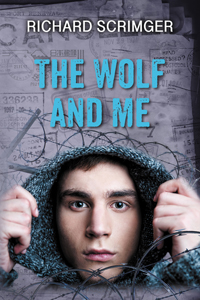 An edgy story of the abduction and escapes of fifteen year old
Bunny O'Toole. He can't imagine why this has happened nor why they keep asking about his dead grandpa and some anthem.

At first I was a bit thrown off by Bunny's poor spelling failure to understand what was happening.  As I kept reading, I realised that he has had some challenges in life and in school.  The writing style started to make a lot more sense and added realism to the story.

Whether he had anything to do with it or not, Bunny has got himself into a difficult set of circumstances that would seem fantastical if the explanations didn't make it so plausible.  The skill of author Richard Scrimger shines through in his ability to make me believe this story.

The stories of Bunny and his six brothers/cousins starts in Seven (the series) and continues in Seven Sequels.  Bunny's tale starts in Ink Me.   This is a brilliant concept.  Seven authors writing seven books with the same set of characters and backgrounds with plot lines that intertwine and converge at key points  and on top of all that, they are published on the same date. In the past, it took years for one author to complete a series, now your child can read all the books while they are still in the recommended target audience.  Two years later, they did it all again.

A suggestion to parents.  These books would make wonderful party favours as the guests (kids) could trade with each other and read the entire series.  You can read the books in any order as they cross reference each other's story lines.

Thanks to Orca Book Publishers for my review copy and for use of the cover image.