At Winter's End by Robert Silverberg 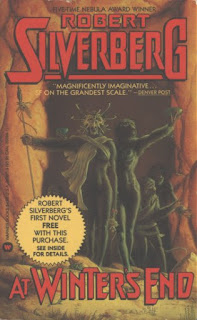 The earth was doomed. Devastation was going to fall from the sky for thousands of years and life on earth could not continue in it's present forms.  Of the six type of sentient being, four knew they would not survive, one decided to take their chance on the surface and the sixth moved far underground.  After 700 000 years, the death stars were gone and it was time to venture forth out onto the renewed surface.

The story is carried by several main characters.  Koshmar had long hoped that she would lead her people from their long shelter.  By maintaining their long standing traditions she sought to fulfil the prophecies  that had long sustained her.  I didn't really like this character, but then again, leaders aren't always meant to be loved when their job is to lead.

Thaggoran was the old man of the tribe, the chronicler, who died soon after they emerged.  The loss of so much of the tribe's history opened the people  up to new choices and opportunities.  Hresh was but a boy when he took up the role of the new chronicler.  His character added so much to the story as he had to re-create his job within their new life on the surface.  It was interesting to watch Hresh grow up and develop into a powerful man.

Finally, there is Torlyri, the offering woman.  While underground, her job was to maintain the peoples link to their prior surface life.  Once they emerge from their cocoon, her role mostly becomes obsolete but she realises that customs bring comfort to the people.  This led her to go it alone and define new ones.

There is a struggle between old and new.  The people have to learn from their past and incorporate that which is helpful. but let go of the rest and use this information to forge their future.  The people seemed to respond in a realistic way to these challenges which made for good reading.

I was pulled into the day to day events of this tribe.  I explored and learned with them.  I felt their anguish when they lost members and celebrated when new ones were born.  It takes a master story teller to make me feel for such imagined characters. I enjoyed every minute of this book.

The story of the people continues in The Queen of Springtime, also published under the title The New Springtime.