In the Land of the Long White Cloud by Sarah Lark 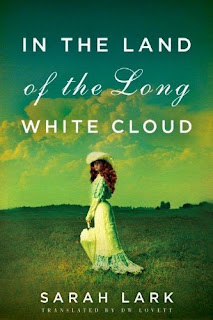 Women didn't have a lot of choice in the direction of their lives in mid nineteenth century England.  Helen Davenport was working as a tutor when a notice in her church bulletin led her to accept a marriage proposal to an unknown sheep farmer in New Zealand.  Gwyneira Silkham's future was determined when her father lost a hand of cards to a self proclaimed sheep baron also from the Christchurch area of New Zealand.  These women's lives were tied together from the time they set foot on the ship that transported them to their new homes.

Marrying a gentleman in a newly settled English colony had seemed exciting and romantic to both ladies.  It was only after they left the ship that they realised how little they were prepared for the hardships of living in such a new colony.  Distances between farms was huge, communication was as fast as a horse could travel.  Both women had to chose whether to embrace their Maori neighbours and learn their language, about their culture and beliefs or to follow their husbands lead and treat them at best as hired help.

I feel that Gwyn and Helen reacted very much as women of that time period.  Once they arrived in New Zealand, they had little choice but to accept their circumstances and make the best of them.    We spend a lot of time with Gwyn, her husband Lucas and Helen and learn lots about them.  We see the three of them learn and grown from the situations they find them selves in.  .

I have an affection for anything kiwi and this book was no exception.  I read it compulsively.  I loved the glowing descriptions of the breath taking country side  as well as the gritty ones of the towns and roads.  Of course, you can't tell a story of this time period of New Zealand without talking about sheep. They are central to this tale.  Yes, there are sheep and all that goes with them, but it doesn't overwhelm the entire story.   Author Sarah Lark has a good balance between the storyline of the people and the sheep talk and tied them together well.

While reading this book, I did feel a distance between the author and the tale.  It seemed that it was a story written by someone who had never been to New Zealand and that she was only imagining what it would be like to stand on it's soil, to view a flock of sheep on a hill, or to crest a peak and view the land unfolding below her.  Whether author Sarah Lark has visited Christchurch or this connection was lost due to the work of the translator D. W. Lovett, it was still a captivating read which I very much enjoyed.

The story continues in Song of the Spirits and then in Call of the Kiwi.

Sarah Lark is a pen name of Christiane Gohl.  She also publishes under Ricarda Jordan and Elisabeth Rotenberg.

Thanks to Amazon for use of the cover image.
Posted by Heather at 10:36