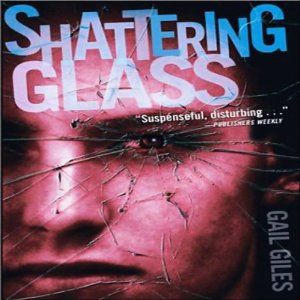 What could cause four seemingly normal teens to violently kill one of their classmates. Author Gail Giles Gives us the ending in the first lines of tihs story then slowly tells us how this disaster unfolded.

Simon Glass was the school nerd, the butt of jokes and was picked on just for being alive.  Rob Hayes is new to the school yet quickly claimed the spot of most popular boy.  It came as a great surprise to Rob's friends, when he decided to befriend Simon with the goal to make him popular.  Why did he do this, was he being sincere in his concern for Simon, or did he have some ulterior motive.

In every high school there are boys like Rob, Young, Bob, Coop,  and Simon.  Decent kids who graduate and continue on to become responsible adults.  In this school, something happened, something wrong and disturbing.

I listened to the audio book version two times.  The first, I was stunned by the events, questioning how this could happen.  The next time I listened to it, fully knowing what was to occur, I paid more attention to the reactions of the boys during the events.  I liked even better the second time. While I did enjoy the audio book as read by Scott Brick, I did experience some confusion.  At the beginning of the chapters, there are short passages/quotes by some of the other students at the school. I found it hard to know when it was Young, the narrator speaking or one of their class mates.

This is a story that grabs you and won't let go,  It makes you pay attention even when you want to walk away.  I could sense that they boys were heading toward something wrong, I didn't know what and I couldn't do anything to stop it.  Shattering Glass contains a powerful message.  It's not an easy read, but well worth the emotional toll it might take on it's readers.

Thanks to Audible for use of the cover image.