Needlework Tuesday - A teaser, A challenge, An offer 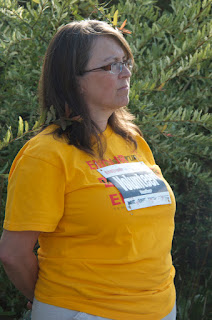 Wow, last week sure was busy.  I was so absorbed in cooking and feeding the 150 runners and volunteers from the Endurrun Running Series, that I didn't have a chance to get to my blog.   We set a record for the number of hard boiled and devilled eggs, 18 dozen.  I used 395 ounces of chick peas in one week to make hummus and a few other dishes. And the list goes one.  Out of all the thousands of photos taken, so far, I have one found this one of me from the pre-race meeting.  From the serious look on my face, I must have been pondering just how big of challenge was ahead, that of feeding so many people with such different dietary needs. 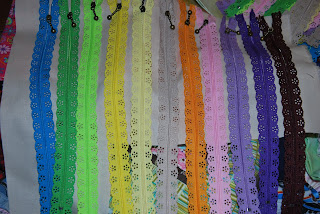 My thoughts did flit to sewing a few times during the week.  The hardest part was when a package arrived.  Upon opening, I found it contained dozens of fancy floral cut zippers I had ordered.  They are 12 inches long and in eleven different bright colours.  Time only permitted sorting and caressing.  This week will be different.  Time to put them to better use that being a table ornament. 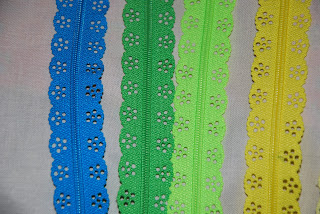 Aren't they pretty.  Don't you want some to play with.  I am most willing to share my bounty with  a few of my online friends.  There is a catch.  You have to make something with them, write a blog entry , then in October on the specified day post it and link back to my blog.  We'll have an online zipper party to show off our creations.

If you want to join in the fun, leave a comment telling which colours you'd like (numbers 1 - 11 starting on the left), and I'll send two zippers each to a few commenters.

Now I need a little inspiration.  Share what you've been working on during these dog days of summer (or the end of winter for those in the extreme south).  Mister Linky is waiting below.

Hi Heather,
Those zippers are really pretty. But I'm not good a sewing. Kind of ironic that I can make quilts but can't sew. lol Sounds like the race was busy. Hope you lots of fun along with all the cooking. Have a great day!

What fun those zippers are I love them all, my favorite color is whatever I am working on and I just posted a garden quilt, every color under the rainbow!!
What will you do with yours Heather?

WOW never seen zippers like that! My favourites are 1 and 2 but they are all gorgeous colours. You do look very pensive! xx

The zippers are cute! I can't wait to see what you and the other ladies make from them. I tend to avoid zippers like the plague but I made my daughter a zippered duffle bag recently and it wasn't as hard as I remembered.

I wrote a post last week but forgot to go back and link it, so I'll link twice this week.