Locked In by John Scalzi 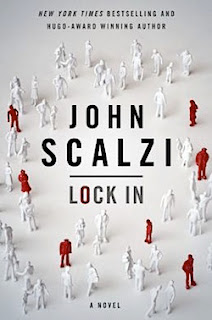 A great flu has struck the world with over 2.75 billion infected resulting in over 400 millions deaths.  The survivors are divided into three groups: those who suffer no lasting symptoms, those who appear and function normally though have experienced significant changes to their brains, Integrators, and those who's brains are fully aware, but their bodies are not responsive,  they are locked in.

As a result, the worlds technical resources are directed to deal with the locked in.  Advances neural nets are developed, as are  PTs, personal transports, these are artificial bodies that the locked in person can link with via their neural net, allowing them to have a life outside their non-responsive body.  Going one step further, the neural nets can be used by the locked in people to share the bodies of the Integrators.

This story takes place about twenty five years after the original onset of the 'flu' which is now named Hayden's Syndrome.  It is common place to work and socialise with locked in people via their PTs.  Rookie FBI Agent Chris Shane (locked in) and partner Leslie Vann (former integrator) are called to the scene of a crime where a working integrator has killed someone.  Who is at fault, the integrator who is unaware of the actions of his client, or the unknown locked in client.

Running parallel to the investigation are social unrest and protests by the locked in to drastic cuts in their funding. Some are also against research to find a cure to the flu which is still virulent.  A cure could spell the end of this new culture.

This is a fascinating story.  Mr. Scalzi has created a complete world that is well adapted to the post-flu reality.  He has striped away that which is irrelevant.  Agent Chris Shane functions well in a PT, it never is an issue of whether Chris is male or female, either way, the agent is most capable of completing the investigation.  Likewise, cultural heritage is not an issue.  The PT suits are function based and haven't been described as fashion conscious.   I applaud a world where gender and race  take a back seat to ability.

Before reading Locked In, you might want to read Unlocked: An Oral History of Hayden's Syndrome at TOR.com.  This free story, written as an investigative report.

Cover image credit to TOR.com
Posted by Heather at 08:00