The Cutting Season by Attica Locke 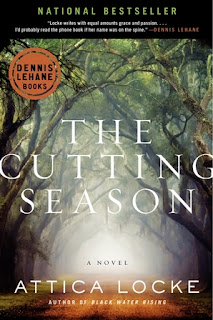 The Cutting Season is set on Belle Vie Estate, formally part of a larger sugar cane plantation located in rural Louisiana.  It is now a tourist attraction and event facility.  After a life crisis, Caren Gray and her young daughter return there and she finds work as the estate manager (sort of a present day overseer.).  When the body of a migrant worker is found on the grounds, it disrupts daily life and re-opens old wounds. Caren can no longer ignore the unsolved death of Jason,  her several times great grandfather.

The first time I read this book, I really felt the injustice of slavery in the United States.  My thoughts on this overwhelmed the real story.  I let time pass till I felt ready to read it again.  The second time, I  listened to the audio book ready by Quincy Tyler Bernstine.  Listening again, I was free to get involved in the current story and in Caren's struggles.

Even when she left  the plantation for law school, she was never free of the strings that tied her to Belle Vie.  Until she resolves Jason's death and the secrets long shrouding the truth , she won't be able to move on with her life.

There is so much happening in this novel, that it is well worth reading more than once.  The vivid descriptions of the plantation grounds had me wanting to stroll through them on an early morning walk with Caren.  I could feel her envy of the closeness of the rest of the staff.  Regardless of their skin colour or background, they had formed a family in which Caren was not included even though she had grown up there.

I enjoyed this book more the second time and wouldn't hesitate to recommend it to others, particularly those interested in American history.

Thanks to HarperCollins Canada for my review copy and for use of the cover image.
Audio book by Dreamscape Media