The Gardener by S. A. Bodeen 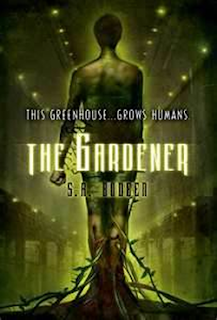 After a brief stop at his mom's work, Mason had intended to spend the weekend with his life long best friend.  While waiting for his mom, he plays the video of his father reading a children's story and the audio has a startling effect on one of his mother's charges at the Haven of Peace nursing home.  After awaking from her catatonic state, Laila asks Mason to help her flee.  So much for a peaceful weekend.

What's a young man to do when the most gorgeous girl he's ever laid his eyes on asks for his help.  He helps her of course.  He didn't realise the events he'd set in motion.

This is a coming of age story unlike any other.  Mason has struggled with social issues since at the age of five a neighbour's dog savaged his face. He knows his mother keeps secrets, but he can't imagine what they might be and how big an impact they might have on his life.

I enjoyed the developing relationship between Mason and Laila.  From the moment he felt her need, he shifted into the role of protector  and didn't falter.  A worthy quality for a young man.

The scientific research in this book is fascinating.  I haven't the slightest idea whether it has even the remotest possibility of success in the real world, but it is understandable why some might want to see it succeed.  It prompted me to ponder limits for scientific research.  Just because we can do something, it doesn't mean we should.

I listened to the unabridged audio version  from Brilliance Audio as read by Luke Daniels. 6 hours.  Mr. Daniels did an excellent job of portraying the characters and bringing them to life, particularly Mason's father.

This is a well told story and should appeal to a wide range of YA readers.

Ms. Bodeen latest book The Detour is due out in October 2015.