First Nations Friday - Stone Song: A Novel of the Life of Crazy Horse by Win Blevins 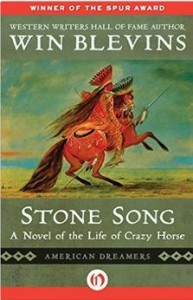 In Stone Song, author Win Blevins tells a fictionalised story of the Lakota warrior His Crazy Horse. While the events, locations and most of the people involved are based in fact, the thoughts of Crazy Horse are as imagined by the author.  To bring this warrior to life, Mr. Blevins carried out extensive research into the beliefs and practices of the Lakota people.

His Crazy Horse is thought to have been born in the winter of 1840-41 and died September 5, 1877 at Fort Robinson, Nebraska.  There are no known photographs of him.

By all accounts he was a skilled warrior and brought much honour to his family and people.  At the same time, he was a private and a humble man.  He was not known to wear the marks to show his battle accomplishments.

This is a long book full of descriptions of the lands and the people.  Much time is spent exploring the beliefs and practises of the Lakota.  These lengthy descriptions served to introduce me to the mind set of these people, which is much different from that of white people who were the newcomers to the Americas at that time.  It was interesting to learn of the many challenges facing the tribes at that time.  The white soldiers were ever pushing the Lakota from their traditional lands.  Yes, they were invited to live on agencies, camps controlled by the military, and become dependent on the skimpy generosity of the government, but that would be merely a shadow of their former lives.

By the end of this book, Mr. Blevins had succeeded in bringing life to the legend of His Crazy Horse.  While I can't really identify with him as a warrior, I can see him as a man who only wanted to be allowed to live his life as his spirits directed and to provide for his family.  His Crazy Horse left this world long ago, but he is is still remembered and the stories of American Indians are still unfolding to this day.

Thank you to author Win Blevins and NetGalley for my review copy.
Posted by Heather at 08:00