If I Fall, If I Die by Michael Christie 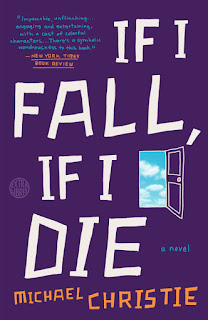 Diane Cardiel has agoraphobia, and hasn't been outside in years.  She is subject to panic attacks and sees everything as dangerous.  She has passed these fears along to her son Will who has also remained indoors for the past eight years.  He decided for himself that it was easier to go along with staying inside than to go out and upset his mother.

Now that he's twelve, he decides to go outside and investigate a bang/explosion at the front of his house.  This leads to a meeting with a boy, Marcus, about the same age as himself, followed by a rash of excursions outside.  After a short time, Will determines that it's time for him to attend school where he makes a friend, Josuah and he continues to inquire about the now missing Marcus.

This has lead him to question all that his mother has told him.  Since he's spent all his time alone or with his mother, he hasn't formed relationships with any others and has to figure out this new world by himself.  To complicate matters, he also has to figure out the girl thing.  Will has no idea who to trust and what to expect from the outside world.  He doesn't know what is reasonable to try and what is too risky.  Things that would normally be learned over years of trial and error, he has to learn in a crash course before he gets himself in too deeply or dangerously.

Throughout the book, I was nagged by the question of the transfer of the mother's mental health issues being transferred or impressed up the child. How does one deal with such a situation.  I was rooting for Diane, I was eager to learn whether the impact of Will's ventures outside would have an impact on her.

The story is told from both their perspectives which I felt was a good approach.  This is a situation that affects both of them, though in very different ways.  It wasn't touched on much, but it was interesting to see how the outside responded to Diane's situation.

I really enjoyed this story and look forward to more novels by debut author Michael Christie.

If you enjoyed Room by Emma Donoghue you'll probably enjoy If I Fall, If I Die.

This sounds interesting! Is it written for an adult audience or a youth audience?

I would say it is written for an adult/young adult audience.