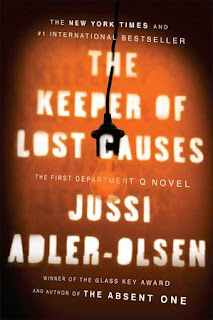 Deputy Detective Superintendent Carl Morch has seen a lot in his 25 years on the job. Upon returning to work after a deadly shooting that left one of his partners dead and another paralysed, Carl is promoted to head of the newly created Department Q which has the objective of solving Copenhagen's cold cases.

The first case he examines is that of Merete Lynggaard, a politician who disappeared without a clue five years earlier.  With the help of his assist Assad, Carl dives in to the case and finds more than a few loose ends.

Carl is a top notch detective but he is tired and worn down.  Sitting at his desk with his feet up and newspaper is not a bad way to spend his day at the office.   His assistant Assad has different ideas.  He wants to get to the cases and prods Carl along.

As the case proceeds, we learn that Carl  is a stickler for following up every single possible lead even when he figures they won't lead anywhere.  This is the type of dogged determination that I want to see in my fictional detectives.

Carl's story follows the day after day investigation while Merete's story runs along side, starting on a path more than five years ago and progressing quickly to converge with  Carl's present day.

I found both Carl and Assad to be very likable characters.  Carl's life is far from perfect.  This makes him human, he is disgruntled with being shuffled to the basement, but once he starts an investigation he has to carry it through to it's conclusion.  He can't skip steps or overlook leads to create an expedient end.  Assad is a willing assistant.  He want to learn and be helpful, at times pulling Carl along with him.  He undoubtedly has many secrets in his past.  I want to see both of these men again in future cases.  Likewise, I grew to care for Merete, and wanted to see justice for her.  I'm looking forward to reading the next book in the Department Q series.  I was enjoying this book so much, that I ordered a paper copy for my husband.  (this book was also published under the title Mercy in some countries)

Erik Davis did an excellent job as reader. He brought these characters to life and his use of accents and Danish pronunciation kept this book in place.

website for author Jussi Adler-Olsen
Thanks to Penguin Random House Canada for use of the cover image.