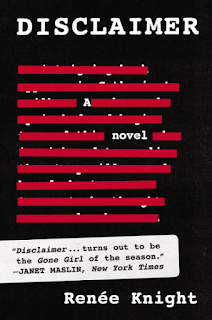 I'll admit right off that I didn't like the characters in this book. They were not likable and I didn't feel any sympathy nor empathy for them.  I almost gave up reading it a few times, but didn't only because I couldn't accept that author Renee Knight would have written a book with no hope what so ever for none of her characters.  There had to be something I was missing.

For twenty years, Catherine Ravenscroft had been keeping a huge secret from her husband, something about her son that could have blown her family and marriage apart.  We also met Stephen Brigstocke, a loathsome man.  If this former school teacher were a real man, he  is someone who I would avoid at all costs, I would cross the street if I saw him coming my way.  Once these two families crossed paths, life was never the same for either.

As I said from the start, I didn't like these people, but by the end of the tale, I had shed tears for three of them, and finally felt that each of them had earn some level of redemption.  I was convinced that there was no way I would ever feel for them and that I would not be able to recommend this book.  I was wrong, this is one of those books where you have to keep an open mind and read to the final page before judging it.

Cover image courtesy of HarperCollins.
Posted by Heather at 08:00