One Second After by William R. Forstchen 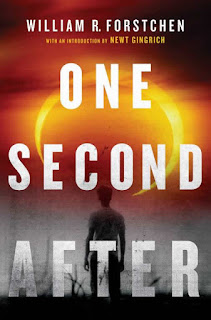 If an EMP were to be set off above a heavily populated first world country, what would be the impact.  That is just the question that William R. Forstchen explores in his book One Second After.

I found the book to be very successful in conveying the dire sequence of events for human life, but it was low on the story telling aspect.  It reads more like a text book manual of what to expect after an EMP. He pulls no punches and the truth is brutal.  The death rates are astronomical.  The plot line though is very light and could have been covered in a short story.  A man, his children, his dogs and a limpid romance.

John Matherson, ex-military and a current history professor at the local college provides the narrative and onerous explanations of just about everything the reader needs to know.  Mr. Forstchen appears to assume that his readers know very little and need to be spoon fed every detail.  He almost lectures us at some points.

I like post-apocalyptic novels and I did enjoy this book for it's realism.  It helped to add perspective to some of the more fantastical book I have read in this genre.

I listened to the audio book from Blackstone Audio as read by Joe Barrett.  13 hours 18 minutes.  The reader was drab and un-enthusiastic.  He did nothing to convince me this was a novel rather than an 8 am briefing I was forced to attend.  If I had a paper copy, I would have skipped the preface by Newt Gingrich, a fictional work is not the place for a politician to be shovelling his agenda.

Is this fictional work accurate?  I could find no notes/statement on Mr. Forstchen's site indicating his research nor sources for the disease and death rates.  There is much on the actual EMP which plays a few minutes role in the story and then it's done.  Researchers might find this an interesting read, but not scientifically significant.  As for general fiction readers, It doesn't really matter, it's fiction and should be enjoyable for the story itself.
Posted by Heather at 14:16