Outside: A Post-Apocalyptic Novel by Shalini Boland 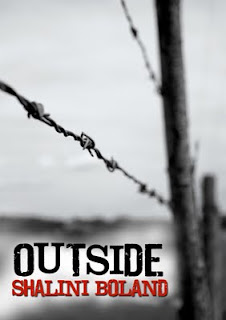 I found this an enjoyable story.  It didn't focus so much on the mechanics of post-apocalyptic life as it did on Riley and Luc and how they live as a result.  They are both rather sheltered seventeen year olds and their naivety is shattered when Riley's younger sister is murdered within the guarded walls of their community.  These walled communities are a major step beyond the gated communities of today.   Even though they have both been trained in survival and defence skills,  once they leave the safety of the walls, they realise that they have no idea of what the world is really like.

Riley had big goals she expected to accomplish out in the world, which is so like a teen her age.  She knew what she wanted and saw no reason why she wouldn't accomplish it.  I did find it unbelievable that so many problems would find them one right after the other.  This set me up to expect that in each situation they would be defeated.  I wonder if that was the author's plan.

Running parallel to Riley's story, is that of Eleanor.  This is where we learn about the crash of British society.  At first I didn't connect this past with the present, but I continued to read and it became clearer.

This is a fast paced story with lots of action.  It also contained a number of plot twists that were pleasant surprises to me.  I prefer more about the struggle to survive.  This book dealt more with the coming of age of two teens  and the development of their relationship.

At the time of writing, this ebook is free at some online retailers.